The Arctic is a region of extremes--extreme cold, extreme seasonal changes in daylight, and high winds. It sits at the top of world, covered in sea ice--a seemingly unwelcome place for life. Yet the Arctic is actually teeming with wildlife--from large mammals like walruses and polar bears to birds, fish, small plants and even tiny ocean organisms called plankton. Living alongside the diverse Arctic wildlife are indigenous peoples who have adapted to the Arctic's extreme conditions and call the region home.

What is the Arctic?

The Arctic is landscape is a combination of:

The outer edge of the Arctic, which includes areas of Alaska, Canada, Greenland and Russia, is tundra and glaciers with large areas sea ice around the pole.

Because of its polar location and the tilt of the earth, the Arctic does not have the normal seasons that we are used to in the continental United States. An Arctic winter has days without sunlight and the summer has days where the sun never sets (which is why it is called the land of the "Midnight Sun").

Throughout the year, the temperature can widely range. A short growing season, permafrost and long, dark winters of extreme cold and strong winds mean that the Arctic is nearly treeless and only small plants can grow.

caribou, as well as polar bears and musk xo

Frost, snowfall, and freezing conditions shape the tundra landscape in the Arctic National Wildlife Refuge. The extreme cold creates a layer of permanently frozen soil called permafrost. In May when the snow melts, the surface soil becomes waterlogged because water can't drain through the permafrost. The region becomes saturated with standing water and flowing streams.

Because the Arctic National Wildlife Refuge is so far north, entirely above the Arctic Circle, the growing season is short, only 50–60 days. During summer the Sun never dips below the horizon, but its long, slanting rays do little to heat up the air. Temperatures range from 2 to12°C (36 to 54°F). During winter the Sun never rises above the horizon. The noon sky looks like predawn. In winter, the temperature averages –34°C (–30°F).

There is little precipitation in winter or summer. Yearly precipitation, including snow, is only 15–25 centimeters (6–10 inches). Wind is a major factor in this area and can blow up to 160 kilometers per hour (100 miles per hour).

Snow can benefit plants and animals because of its insulating qualities. Snow shelters plants and animals from the strong winds and protects the ground from disturbance. Small mammals, such as lemmings, make tunnels beneath the snow and avoid detection by predators.

A long-standing issue in the Arctic National Wildlife Refuge is whether the coastal plain should be developed for oil drilling. Other areas in Alaska, such as Prudhoe Bay, have already experienced oil drilling. Petroleum scientists have examined part of the refuge, called Area 1002, and predict that oil is there. When the U.S. Congress established the Arctic National Wildlife Range in 1960, they made provisions to authorize future oil development in the northern part. People have been debating the issue of oil and gas drilling in Area 1002 for almost 40 years.

The process of drilling for oil

Oil, like other fossil fuels, comes from decayed and pressurized plant material that has been buried and partially fossilized. Deep beneath the surface and permafrost, oil moves through rocks with microscopic holes (porous rock) until it comes in contact with nonporous rock. It collects at the contact of these two types of rock. The first step in drilling for oil is determining if a location has the kinds of rocks that are associated with oil deposits. Scientists can tell about buried rock by drilling cores of the rock or by tracing sound waves as they travel through different rock types (seismic surveying). Next, oil wells are built, tapping into the deposit. The high pressures underground force the oil up the well, where it can be collected. A pipeline transports this crude oil to a refinery. Here the crude oil is refined to oil that can be used to generate electricity or lubricate machines. In the arctic, oil development in isolated areas involves building roads, drilling platforms, pipelines, refineries, and housing facilities for workers. 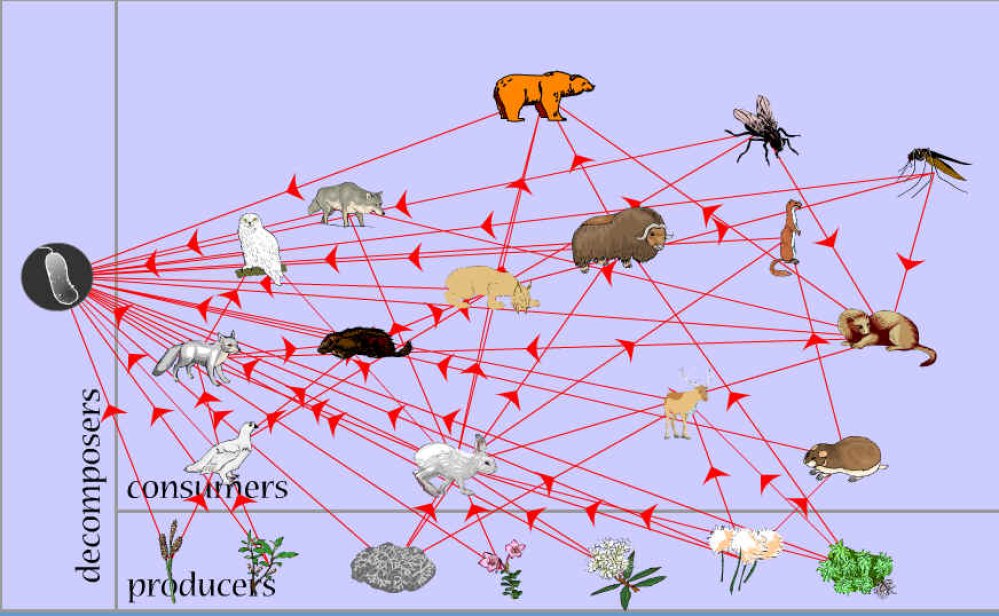 Because of the permafrost, plants in the Arctic National Wildlife Refuge do not have deep roots. Only hardy plants that grow close to the ground can endure the effects of wind and cold temperatures. Grasses and sedges form in protective clumps called tussocks, and shrubs like willow and Labrador tea tend to be small species, under 1 meter (3 feet) tall. Because of the short growing season, many plants rely on asexual reproduction, such as cloning or budding, instead of flowering and forming seeds.